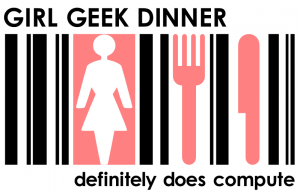 I am really excited to be speaking at the next Toronto Girl Geek evening. I remember attending one of the first Girl Geek dinners in London in 2005. It was organized by Sarah Blow, the founder of Girl Geeks. That evening was pretty much magical: I met Robert Scobble and Maryam Scobble. I also met Hugh MacLeod, Ben Metcalfe, Henriette Weber Andersen and a lot of awesome attendees whose names I can no longer recall unfortunately! It was a surprising evening, full of technology discussions, blogging, changing the world conversations and great wine – I vaguely remember a wine sponsorship there! Next week the Toronto Girl Geek evening is all about Algorithms. And that’s of course something I am super excited about!

Not only am I speaking but TinEye will be hosting in our offices. I would suggest that you get a ticket, but I hear it is sold out! Can’t believe that there are that many people interested in hearing about algorithms!

Inspire more women and girls into a career in science, engineering or technology by supporting Girl Geek Dinners. Perhaps your company could host the next one?